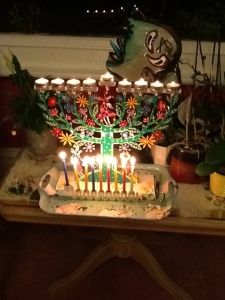 Some years ago I was telephoned by a local radio station, wanting to interview me about Christmas coming so early this year. Somewhat confused I asked “Coming early? But isn’t it a fixed date?” This in turn confused the researcher. After a while I became clear about what she meant – that the shops were already full of Xmas gifts and glitter, even though it was early October. She wanted to know what I thought about it. I had to tell her that as a Rabbi I hadn’t given it much thought, and maybe she ought to be speaking to a cleric whose own tradition was being devalued and commercialised by this particular phenomenon, rather than me. She thanked me kindly and rang off. But it set me thinking.
When we Jews say “the festivals are early this year” we mean that they have taken us by surprise, and we aren’t ready and prepared for them. But Christmas ‘coming early’ means almost the opposite – people OVER preparing for it – at least in one aspect of its celebration. And by this particular type of preparation, the meaning and the message behind the festival becomes obfuscated and ignored.
It is always necessary to prepare for festivals if they are to mean anything more than the superficial enjoyment we can create around them. But the preparation has to be appropriate and considered. “Christmas coming early” is another way of saying that the meaning of the festival has been overtaken and overlaid by the trappings. The preparation has somehow gone askew. The traditions which deliberately build up to the important date (Advent colours, candles and liturgy) are disempowered by the gilt and glitz in the shops.
Rosh Hashanah or Pesach ‘coming early’ really means that we have run out of time to prepare for them, and that happen because we’ve become disengaged from our Jewish calendar. “Jewish time” nudges us with the regular cycle of Shabbat observance, our liturgy includes prayers before the new moon which reminds us monthly just how the year is passing; We read special haftarot before some of the festivals, and others that link us to calendar and time – from before Tisha b’Av to Rosh Hashanah and so on.
There are so many reminders that our tradition has worked into our routines, but only if we keep those routines in our lives. We under-prepare for our festivals each time we could make Shabbat Kiddush but don’t, we under-prepare for our festivals each time we book holidays without consulting the Jewish calendar, we under-prepare for our festivals by not living within Jewish time, and by forgetting to mark each new day and new week with reference to our ancient markers.
One of the things the religious world could learn from the commercial world is that forward planning and continual working towards the goal is the only way that the festival is made to be successful. I’m pretty sure that the Easter Egg planning is finalised by now in most confectionary factories and probably some are already made!
As the days draw in and the trees lose their leaves we may be thinking about latkes and doughnuts, the comfort food of Chanukah, and the bright lights of the menorah in our windows – but to really prepare for the festival we should be thinking of the meaning of having a festival dedicated to the rights of people to practise their religious beliefs and then move on into putting the values of those religious beliefs into action.

And as we celebrate Chanukah this year, our thoughts should also be travelling a little further down the line, thinking about Pesach, about Shavuot, about Rosh Hashanah and Yom Kippur; we should be thinking about how we plan to put our values into action at every festival, and during every ordinary day of the week. Who will you invite to your Seder this year? How will you be able to sit around the table and talk of freedom if you haven’t been considering it throughout the year, – and not only considering it but actively working to maintain important freedoms in our world.
Reconnecting with our calendar is the first step we take in order to reconnect with the meaning of our festivals, to not be taken by surprise each time a date comes round. Forward planning to make our festivals meaningful. As new diaries come into the shops and we write our important information into them ready for the new year, let’s put in the religious festivals, and some time set aside to prepare for them