Tucked away in today’s sidra, in a narrative about idolatrous worship listing the abominations practised by the surrounding peoples, is a verse that stands out for its shortness and its power:
תָּמִים תִּהְיֶה, עִם יְהוָה אֱלֹהֶיךָ.
You shall be whole-hearted with the Eternal your God. (Deut18:13)
The word translated here as “whole hearted” is “Tamim” perfect, whole, steadfast – but the word means so, so much more. It is used differently throughout bible to describe a set of characteristics of quite diverse people and things. Noah is described as an ish tamim hayah be-dorotav” – someone who was ‘tam’ in his generation. Jacob is described as of “ish tam yoshev ohalim” – a simple man (tam) who dwelled in tents.
The Torah itself is characterized by this quality of Temimut. The psalmist tells us “Torat Adonai temimah meshivat nefesh” ‘The teaching of the Eternal is temimah, renewing the soul” (Psalm 19:8). Even the presence of God in the world is described with this word: as Bible tells us of God, ‘The Rock, Whose deeds are perfect (tamim)’ (Deut. 32:4).
And of course there is that famous imperative when God first encounters and calls to Abraham, He says to him: (Genesis 17:1)
וַיֹּאמֶר אֵלָיו אֲנִי-אֵל שַׁדַּי–הִתְהַלֵּךְ לְפָנַי, וֶהְיֵה תָמִים
“I am El Shaddai, walk before me and be Tamim” –
While the word is used repeatedly in bible, of different characters and different times, what is most remarkable is that with all that varied usage, the Torah itself doesn’t ever define or explain what temimut actually is. From context we can see that there is something within it about wholeness, integrity, rightness, a steadfast loyalty to God, blamelessness, uprightness – the synonyms could go on. And yet – when God tells Abraham to walk before God and be Tamim, it seems to be more than a sum of all these good attributes, or even a state of being. It is to somehow walk in the awareness of the presence of God, to see the world mediated through that experience of the divine. It seems to be more richly layered than simple whole-heartedness, describing something about the whole person, the good bits with the bad, the bits we like and the bits we are embarrassed about. We serve God with the full comprehensiveness and extensiveness of our lives.

We learn in sidra Ekev of the importance of giving thanks to God after a meal – “V’achalta v’savata u’vayrachta et Adonai Elohecha al Ha’aretz ha’tovah asher natan lach. When you have eaten and are satisfied, bless the Eternal your God for the good land which God has given you.” (Deut 8:7-10)
The Birkat Hamazon has a number of blessings according to the Talmud (Berachot 48b)–
Birkat Hazan – to praise God who sustains the world;
Birkat Ha’aretz, to thank God for everything, focusing on the Land of Israel;
Boneh Yerushalayim – the petition to protect and rebuild Jerusalem,
And finally HaTov ve’haMeitiv, general praise and thanks for God.
These, and the zimun, the general invitation when three or more eat together, are taken from the verse like this:
When you have eaten your fill, you shall bless – Birkat haZimun;
The Eternal your God – Birkat Hazan;
For the…land – Birkat Ha’aretz;
…the good (land)… – Boneh Yerushalayim;
That God has given you – HaTov ve’haMeitiv.
While there is some dispute about the zimun and the final tov ve’haMeitiv, there is general agreement that to fulfil the obligation we must make the three blessings, of God, and of the land, and of Jerusalem, and that these are biblical commandments. (Jerusalem Talmud: Berachot)
Yet earlier on that same page in the Gemara text 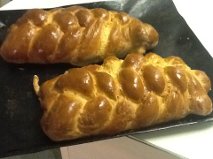 , we are told that Moses composed the Birkat hazan , that when the Manna fell, Joshua composed Birkat Ha’aretz when the people entered the Land of Israel, David and Solomon composed Boneh Yerushalayim at different stages of the building of the city, and the Rabbis at Yavneh composed HaTov ve’haMeitiv in response to the burial of the martyrs of Beitar!

Wherever they do come from the Birkat Hamazon, the blessings recited after food, is a different animal than most other blessings we do, which tend to be one-liners and which are focussed on the particular action involved and which, crucially, we do BEFORE the act. (The only one we do afterwards apart from Birkat Hamazon is the blessing after lighting the Shabbat candles, and then only so as not to say a blessing in vain, as we may bless and then not have time before Shabbat comes in to kindle the flame). Yet here in relation to food we bless BEFORE, with haMotzi, and then we go in in Birkat Hamazon to ask for blessing for the land, for Jerusalem, for God as protector as well as simply thank God for the food.
So why the extra Berachot, and why the need to extend the sense of our being blessed not only to the meal we have enjoyed but to the land of Israel, to Jerusalem, to our relationship with God? Nachmanides suggests that the long Birkat Hamazon is needed as an antidote to pride and arrogance. In the context of the biblical passage from where it comes, Moses warns the people against forgetting who is behind our food, who gives us our wealth – God. Moses warns that we must not just take our food from the land as if it is a right, but to remember the relationship we have with the land, that it is itself a symbol of our relationship of obligation to God.

This week, the Shabbat after Tisha b’Av, we begin reading the series of seven haftarot of consolation – known by their Aramaic name : – sheva’ de’nechamta.  The progression of special haftarot will take us to the Shabbat before Rosh Hashanah, when we begin the New Year and hopefully able to leave behind us the pain and trial of the life we have lived, and can looking forward to starting again with a clean slate.

All of the haftarot of consolation are taken from the preacher-poet known as “second Isaiah” or “Deutero Isaiah”, who is an unknown figure who lived among the exiles in Babylon in the 6th century BCE, and whose writings were later attached to those of the first Isaiah, who lived well over a century earlier. They appear as chapters 40 to 66.

This second Isaiah is a mysterious figure. We know nothing about him. Not about his personal life, nor the circumstances of his prophesying. But we do know that the big powers of the time were Egypt and Babylon, one to the North and the other to the South, pressurising the land in which the Jews were living.

The Babylonians, led by Nebuchadnezzar, had plundered Jerusalem in 596 BCE and destroyed it 10 years later. They had carried the members of the political, religious and intellectual classes into exile, hoping that in time they would be assimilated and any threat they posed be disarmed.  This had worked well 130 years earlier when the Assyrians had conquered the northern kingdom and carried the ten tribes away, but the effect was not repeated with the exiled Jews from the southern kingdom who developed ways to keep their identity and religion alive – they created rituals to substituted for the lost Temple, read from sacred texts, created prayers and a liturgical framework, and laid the foundations for the institution of the synagogue.

One of the people who were part of the process of recreating a form of Judaism possible for the exiles to cling to was this second Isaiah.  His message was simple – Jews have an ongoing relationship with God.  Because of our actions the Temple had been destroyed and the nation exiled from the land – but if the people would repent and return to God with sincerity they would be pardoned, because God is unfailingly merciful and forgiving.

His message of consolation came at a crucial time. The people desperately needed something to comfort them as they faced an unknown future, hoping it seemed against hope that there could be an end to exile.

And there was. In 539 BCE Cyrus, the king of the Medes and the Persians, overran Babylon and allowed the Jews to return home. We cannot know if this Isaiah was still alive at the time to see that his words had come to pass, but they were recorded for us to read and remember– albeit attached to the great prophet Isaiah – and we read more haftarot from his book than we do from any other.

It is appropriate and it is necessary to begin reading from this prophet of hope immediately after the darkest time in our calendar, the Fast of Tisha b’Av. This year more than ever, the world feels bleak and frightening; it is unclear what is going to happen even in the near future. There is currently no way we can see of making things better and so there is no point in false cheer, nor in trying to explain and rationalise the situation we find ourselves in.

As with all mourning it must be endured and survived.  All there can be to help us is the warmly expressed comfort offered for the pain that is felt, the awareness that we are not ultimately alone or friendless.

The words “Nachamu Nachamu Ami –Comfort, Comfort My people” – is really all that can be said in the face of the reality of painful destruction and exile that is the world just after Tisha b’Av.  Be comforted that God is still with us, and never give up hope. 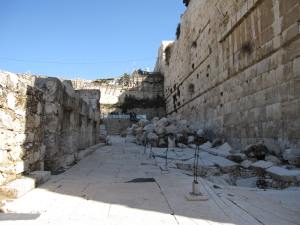