Abram’s journey, the expedition which is also the start of the journey of the Jewish people to the land of Canaan, begins with the words “ Lech Lecha” , a strangely poetic and formulaic compound meaning something like ‘go for yourself’ or ‘go into yourself’, or even the rather enigmatic ‘go towards yourself’. Without any introduction God tells Abram to leave his parental home behind, to take his entire family and go to a foreign land he does not, and cannot, know.   Doing this will incur God’s blessing for Abram and his descendants.

The bible tells us tantalisingly little about what is being left behind. There is a little written about Abram’s father Terach, but nothing about his wife, or about Sarah’s parents. But even so, the wrench through which they are torn from their past is almost palpable. We can imagine the feelings of the travellers who may never again see their home and their families, and we can imagine too the desolate feelings of those loved ones who are left behind.

The blessing/promise that God gave to Abram and Sarai comes in four parts: Firstly God promised to make them a great nation. Then there was the offer of divine blessing. This is followed by the promise to make their name great, and finally the exhortation ‘Be a blessing’.

This four fold pledge to Abram and Sarai has been interpreted again and again, and the many and various commentators have each offered vastly differing ideas about what it all means – the only consistent factor is that each commentator expounds within his own particular historical reality so that midrashic commentators who lived in days of peace and prosperity for the Jews as much as for their neighbours could really believe that a great nation would mean they would have many children, that God’s blessing could only mean material prosperity, and a great name imply straightforward fame.

A commentator in medieval Russia or Poland though would not see the text in the same way, “A great nation must mean greatness of quality, not quantity” laments one rabbi who sees the toll that centuries of pogroms have taken on the Jewish population. Another bemoans the fact that for Jews the blessing of wealth is a temporary phenomenon, lasting at the most a generation or two.

The truth is, as we know, that every generation makes its own journey, and every generation has to contend with the situation it finds itself in. In every generation we act out the leaving, we find ourselves at the beginning of something new again, we relive the pain of the parting, the fear of the unknown, the response to a call of blessing or else the need to leave behind something that is no longer a tenable way of life for us. We did it, our parents did it, our grand parents did it – and theirs. And our children too will at some point undertake the journey – the Lech Lecha that is in our essential being.

The creature of popular imagination – the wandering Jew – begins with Abraham, who describes himself as an IVRI – one who has crossed over. Haran, the place where Abram and Sarai lived at the time we met them (they had, after all, travelled with Terach already from Ur of the Chaldees) means ‘crossroads’ – they are par excellence the people who move from one area to another, across boundaries, through the margins. Although promised the land of Canaan they remain essentially rootless for most of the stories, and by the time of Sarah’s death we still don’t have a clear picture of whether they had pitched their tent together and settled down. Only by the time of Abraham’s burial at the cave of Machpelah alongside his wife, do we get a sense that they have finally stopped all their restless travelling.

This continual movement, the habitual crossing of limits and of confines, is probably our greatest – although certainly our most uncomfortable – blessing.   Because we never get too settled we are able to retain a particularity, the clarity of perspective of the outsider, we are able to retain a sense of the ‘otherness’ of the ‘other. We are able to bring many strands and streams of culture and philosophy into how we view the world, how we operate in it., and we move between different worlds with great ease. It seems that the word ‘cosmopolitan’ has become almost a code word for ‘Jew’ in some quarters.

But there is a price to be paid for our being Ivri’im, and it can be a high one. Measured out in suspicion and mistrust, in persecution and even murder, we have many times paid a terrible cost. We know this, but it has never stopped us following the imperatives God gave to Abram – “Lech Lecha” – “Go to and for yourself”; “Hayei Bracha” – Be a blessing.

There is pain in leaving and there is pain in being left behind – and the pain is all the greater when the travelling doesn’t come from active and willing choice, but from the forces around us. In the last few years there have been published a plethora of books of personal stories from the years of the holocaust, an outpouring of memories that have been held and contained quietly within so many people, suppressed while they lived their active lives, attaining qualifications, working hard, marrying and bringing up children. Now is the time to tell the real stories of those Lech Lecha’s, and emerging from these stories is an echo of the pain and confusion of leaving the parental home with its security and its warmth and love. I never fail to be moved to tears when I read of the separation for ever of children and their parents, of partners and friends. This is part of our historical reality, but it is hard to find any sense of God within it.

But there is another part to the Lech Lecha of setting out on the journey, and that is that while bonds are inevitably broken and families ruptured beyond repair, the journey itself brings new experiences, often a broadening of horizons, and most importantly it seems to me that we recreate family and community alongside those with whom we journey.

I am the daughter of a German Jew who came to England as a young teenager alone, leaving parents and extended family behind. I grew up in a synagogue community made up predominantly of survivors, and I remember not only the pain in their eyes, but also the dedicated devotion to create a vibrant and warm synagogue community. I remember the Jews who gave up their time to teach me and the other children of the community bible and siddur, albeit with strongly German accented Hebrew and English. I remember the Jews who gave up their evenings to plan for Jewish festivals to be both educational and fun, the Jews who gave free rein on the bimah to the young teenagers on the community because they knew that everyone should be able to take a service – you never knew when you might find yourself in a place where there was no one able to lead it for you. Few of them had roots more than a few years old in the community, yet they made roots for themselves and for their families. They settled in the main, though their children have generally moved on again to larger cities. But they did indeed make, if not a great nation, then a wonderful Jewish community and a link in the chain of tradition. They may not have noticeably received a divine blessing, but they did make for themselves a good name, and they lived out the imperative to be a blessing. When I look back at the journeys of the generations immediately before mine, the perilous journeys from what seemed to be simply called “Russia” at the beginning of the last century, or the terrified fleeing of Europe in the early middle part of it, and I see the fruits of those journeys, I see that we continually travel towards ourselves, as well as for ourselves. This strangely poetic formula is the only one to do justice to the journey. 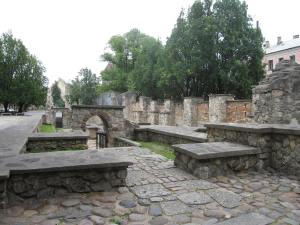