In a very few days we will be celebrating Shavuot, a festival of biblical origin which can lay claim to being  one of the most mysterious of our holy days. To begin with, it has no fixed date but instead we have to count towards it from the first day of the Omer, the bringing of a sheaf of the new barley harvest which must be offered in thanksgiving before the harvest can be used. In Leviticus 23 we read “And the Eternal said to Moses, Speak to the Children of Israel and tell them, ‘When you are come into the land which I am giving you, and you reap its harvest, then you will bring the first omer of your harvest to the priest, and he will wave the omer before the Eternal for you to be accepted, on the morrow after the Sabbath, the priest will wave it…and you will not eat bread nor parched corn nor fresh corn until this day, until you have brought the offering of God, it is a statute forever…and you will count from the morrow after the Sabbath from the day that you brought the omer of waving, seven weeks shall be complete, until the morning after the seventh week you shall count fifty days, and you shall present a new meal offering to the Eternal” (9-16)

In this opaque text a few things stand out: That we must bring from the new harvest in thanksgiving to the Creator of all before we can eat from it. That we must count a period of fifty days from the bringing of one harvest (barley) till the next harvest (wheat), and that the fiftieth day is also to be a festival with full ritual panoply.

It is a feast of harvest, a festival of first fruits – but so are other festivals. It feels like there is something missing in the text, some other layer that was either so well known as to be pointless to explain, or something so deeply mysterious as to be impossible to explain.  Its name is also problematic – in the same chapter we are told of the festival of matza called Pesach and of the festival of booths called Succot but Shavuot – it just means weeks.

The lacunae were noticed very early on and if nature abhors a vacuum, rabbinic tradition refuses to allow one too, rushing to fill any apparent jump or void in text with explanation and midrash. So to begin – what is the date of Shavuot? Should it always be a Sunday, as it would be if we really counted seven weeks from the ‘morrow after the shabbat’    הַשַּׁבָּת  מִמָּחֳרַת

The Second Temple period was one of great disruption and great creativity. Two powerful groups – the Pharisees (forerunners of the Rabbinic tradition) and the Sadducees (political and priestly elite) differed as to the date of Shavuot. The Sadducees read the text literally – the counting began the day after the Shabbat, while the Pharisees interpreted it, specifically that the word “Sabbath” was a word meaning not just the seventh day, but also “festival”, specifically in is case the festival just described before the text quoted, and therefore the omer counting would begin the day after the first day of Pesach.  At a stroke Shavuot was linked to Pesach and with a little creative accounting with the days of the journey towards Mt Sinai the Rabbis could attach the events at Sinai, the giving of the Ten Commandments and the creation of peoplehood with Torah as its powerful identifier to this date. So Exodus linked to Revelation, Freedom to Responsibility, and Shavuot stopped being simply an agricultural festival on a date that could vary and became a fixed point – a high point – in our journey to Judaism.  Shavuot became zeman matan torahteinu – the time of the giving of our Torah – the oral as well as the written – and more than that became the date of the unbreakable covenant made between God and the Jewish people.

So by extension, Shavuot became understood to be the date that we became not just a people, but God’s people. God descended far enough from the heavens to build a different kind of relationship with us, offered us a gift in order to delineate that relationship. And the language of marriage came into play – God wooed us in the desert and brought us to Sinai where the ‘wedding’ took place. God plays the part of the groom, Israel of the bride, and the words of Hosea are used “I will betroth you to me for ever, I will betroth you in righteousness and justice, In love and compassion, I will betroth you in faithfulness and you will know the Eternal (Hosea 2:2.1-2.). The mystical tradition went so far as to create a wedding liturgy within the Shavuot service, and famously Israel Najara, the poet and mystic of Sfat, created a ketubah to be read before the Torah reading in which God as bridegroom and Israel as bride are symbolically betrothed.

The people of Israel as the bride of God, the covenant of marriage being marked with Torah, with Shabbat, with gifts that bring us closer to God – it is extraordinary in so many ways.  The position of the woman in this image – that she is Israel, that Israel is fundamentally feminine, and that the relationship is one of real love and partnership between both parties to the agreement -this is the ideal of marriage. Right from the creation stories in Genesis, where God created men and women at the same time, or where God created woman to be ezer k’negdo, a partner and help who was equal and in dynamic tension to the man, the relationship of marriage between two companions in bible and in the early rabbinic world was real partnership and both parties had their own agency and autonomy which contributed to a strong and confident enterprise.

Quite how we got to the position today from this ideal and idealised partnership to women being marginalised and disempowered in many areas of ‘traditional’ Judaism is a long and painful journey.  How has Israel, the bride of God, relegated its own women to behind a mechitza, distanced us from prayer and from learning, spun stories of idealisation that turn the Shavuot ideas on their head, (for example those about the special spirituality of women which means they don’t need to perform mitzvot). Over time there has been a persistent and incremental and continuing removal of women from the discourse of partnership, from the public space and from the partnership which is developed and rooted in the Shavuot mythology of the marriage between God and Israel.  At Sinai the mountain trembled and the people trembled and all the people stood together at the foot of the mountain and all the people answered together saying “everything that God has spoken we will do” as the voice of the shofar was heard and God answered Moses with a voice.  Voices mingling and speaking and answering – God’s voice, Moses’ voice, the voice of all the people, the voice of the shofar. But now it seems that some voices have precedence and other voices must be stilled. After generations of lying fallow and unused in Talmud the dictum of kol isha has surfaced in rabbinic thinking as a prop to their wish to remove women’s voices from their hearing.

Yesterday on Rosh Chodesh Sivan, the women of the wall (WOW)  in Jerusalem held their service for the new month early in the morning. 80 women and more prayed together from their hearts, welcoming the new month and the upcoming festival where Torah was given to ALL the people at Sinai. The prayer was respectful and peaceful and yet – Lesley Sachs, the Director of WOW was detained with the Torah scroll immediately following RH Sivan prayers. Despite a quiet prayer, Sachs was held by police for “disturbing the public order”.  The man who oversees the administration of the wall Rabbi Rabinowitz told journalists that she had smuggled the Torah scroll in under her skirt. An extraordinarily offensive accusation that was provably untrue – she was wearing trousers. But this insight into the mind of the ‘traditional’ rabbi tells us a lot as to why women’s voices are being silenced – what exists under a woman’s skirt is somehow terrifying, our sexuality must be controlled and restrained, a woman’s voice is her nakedness/lewdness in the minds of those who distort the biblical quotation (from a woman’s voice is her sweetness)

We are approaching the anniversary of what happened at Sinai when ALL the people witnessed the divine theophany and ALL the people accepted Torah.  This Shavuot it is even more important that we make sure that ALL the voices can be heard in our public spaces and places, in teaching and learning, in work and in play.  For if God chose to do to Israel what some in Israel choose to do to women, then the marriage must surely be voided on grounds of complete deviation from the agreement.  The countdown is nearly over, the last days of the omer are here. It has been a period of reflection and quietness, readying ourselves for the revelation. Let’s hope the revelation takes us back to our roots, and that the voice of women in prayer and learning will once again be heard with the voice of men doing the same. 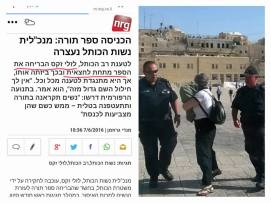