It is becoming common now to have an alternative seder plate with foods to remind us about the importance of the festival themes. So there is an orange to represent the alienated and isolated Jews, be they women, gay, transgender… There is the olive to remind us of the need for peace in the world, and specifically the need to make peace between the Israeli and Palestinian inhabitants of the Land. There is the fairtraid cocoa bean and also the tomato, to remind us of the modern slavery endured by others in order that we have such products cheaply… There is the cup of water filled for Miriam the prophetess who is credited with providing water in the desert. 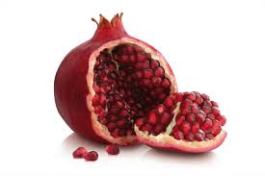 I was asked last year what else I might choose to put on a seder plate, and here is my response:

I would choose a pomegranate to be on my Seder plate as a reminder of the many different strands of my Judaism and the fact that I am free to have a complex layered understanding of tradition. The pomegranate is one of the seven species the bible tells us about growing in the land of Israel, (the shivat haminim), fruits which are traditionally eaten on Sukkot, a full half year from Pesach, a reminder of the connection to the Land to which I remain spiritually attached. It was said to be one of the fruits brought back by the spies to demonstrate the fertility of the land – a tempting luscious fruit that can only be eaten sensually, as Song of Songs reminds us.

Tradition tells us that a pomegranate has 613 seeds – equivalent to the mitzvot, and I particularly like the chutzpah of such a statement and that fact that we remember it while knowing that it is not remotely true. I like that the mitzvot are likened to the jewelled seeds, and the implication of richness and nourishment within them, while remembering the hard pip within each seed that can be both irritation and pleasure, and that can stay with one long after the juicy flesh has been taken. And I like the way that pomegranates are so useful in so many ways – as health food, as astringent, as spice and decoration, as traditional remedy for any number of ailments right through the body, as drink and paste and marinade. It prompts me to think of the multi-faceted ways Judaism is expressed, from the traditional covenantal relationship and discipline of mitzvot, to the loose warmth of ‘kitchen Judaism’ as people respond to the remembered smells of the different festival foods though the year.

Bible tells us that Aaron wore a special garment as high priest, and it was decorated with alternate bells and pomegranates on the hem, so that when he moved the sounds of these objects clashing would be heard and people would know he would be safe – indeed the bible is starkly clear – “so that he will not die”. This brings me from the sacrificial system of Biblical Judaism right into the modern world of Jewish community – people will pay attention to how others are, particularly those who are vulnerable. They will notice if they haven’t seen or heard them, and do something so that their lives are sustained and preserved. The pomegranate is the standard bearer for communication in community.

Another tradition tells us that the forbidden fruit eaten by Eve in Eden was not the apple (a later pun on the Latin ‘malum’ to mean both bad and apple) but the pomegranate. If it is truly the fruit of the tree of knowledge of good and evil, it would be a potent reminder at Seder that we have choices in what we do, a freedom in our lives with consequent responsibilities. We cannot accuse others for our not having achieved what we know we should have, or take refuge in the modern day ‘slavery’ to routine. The pomegranate would challenge us –“know what is important, do what is right”.

A pomegranate is similar in shape to a grenade (indeed its name in both English and Hebrew reflects this) and so it would be a salutary reminder that even that which is beautiful and health giving could easily become dangerous and destructive in the wrong circumstances, another warning on the Seder table to remind us that our Judaism can either sustain us in living well or in living selfishly and without care or thought for the other among whom we live. Choose Life! says the bible, but both blessing and curse are set before us and it is our freedom to decide which way to go.

And finally – the best way to eat a pomegranate is to cut it into two pieces, turn each upside down in one hand and hit it with a wooden spoon so that the seeds fall into a waiting container. A satisfying if difficult thing to do well, a metaphor for much of the Jewish world one might think. But the best bit comes last – once the Seder is over and a home must be found for the objects on the Seder plate, to eat a wonderful juicy fresh pomegranate must be the best end to the ritual I can think of!