In parashat Yitro is the climactic coming together of God and the Israelite people as three months after the dramatic exodus from Egypt following signs and wonders, the people are encamped at the foot of Mt Sinai and Moses and God encounter each other once more in order to create the agreement that as long as the people will obey God’s voice and keep the covenant, then they will be God’s special treasure among all the peoples of the earth, and shall become a kingdom of priests to God, and a holy nation. (Exodus 19:5,6). A period of purification is followed by the majesty of the presence of God, and the words of God are declaimed amid black smoke, thunder and lightning, terrifying the people who declare their willingness to accept the covenant but ask for Moses to be their representative and for them to keep well away from whatever is going on.

The relationship is consummated with words, called in Hebrew the Asseret haDibrot, the Ten Statements, which function essentially as the paragraph headings that prescribe the boundaries and the requirements of the relationship.

Like any new relationship, each side views the other as pretty wonderful, there is no need immediately to get into the gritty details of the red lines and the expectations that will make living together successful or not. But soon of course those realities set in and the couple have to ‘talk tachlis’. Hence the detailed miscellany of laws in the following chapters, including a whole sidra named ‘mishpatim’: the laws and rules of the relationship.

This year, I was especially drawn to thinking about the authority of the rules – who gets to decide what they are, who gets to change them, and to ask – how does the relationship evolve?

In Exodus 24 we have insight into the beginning of the ‘tachlis period’. Moses is to come alone to God. There has been some etiquette about introducing the leaders of the people further up the Mountain, but now Moses tells the people all God’s words and the people answer in unified response “all the words which the Eternal spoke we will do”. Then Moses writes down all the words of God (it is not clear where he does this), after which he builds an altar representing the entire people and there is a sacrificial rite, followed by this information “And Moses took the book of the covenant, and read in the hearing of the people; and they said: ‘All that the Eternal has spoken will we do, and we will understand.’ (24:7)

What is this Book of the Covenant? Why does Moses follow his reading – and the people’s oddly worded response – with a ritual where he takes the blood of the previous sacrifice, sprinkles it on the people and tells them ‘Behold the blood of the covenant, which the Eternal has made with you in agreement with all these words.’ We now have a Book of the Covenant (Sefer ha brit) and Blood of the Covenant (dam ha brit) and then suddenly we are in a vision, as the 70 plus elders of Israel find themselves at a feast where they see God standing on a clear sapphire pavement.

Just as suddenly we are out. God tells Moses ‘Come up to Me into the mount and be there; and I will give you the tablets of stone, and the Torah (teaching) and the commandment (mitzvah)(, which I have written, that you may teach them.’ (v12)

What are these tablets of stone, the Torah and the Mitzvah that Moses is to teach? How do they fit into the covenant? Why then does Moses stay on the mountain after this for forty days and nights, hidden in cloud, leaving his people leaderless and frightened and alone?

The text, like the top of the mountain, is opaque. We cannot understand the encounter, only know that there was indeed such a moment that cemented the relationship between God and Israel, a relationship that might go through many rocky patches and many silences, but which will never actually break. We have a brit, a covenant, and we are tied to each other for eternity.

But what are the parameters of the covenant? What do we have to do? What will we come to understand? And while the existence of the covenant is unchanging, the conditions have clearly developed and altered.

The Talmud sets out the traditional position of the verse asking: What is the meaning of “And I will give you the tablets of stone and the law and the commandment, which I have written so that you can teach them”? “Tablets of stone”-these are the Ten Commandments, “the law” -this is the Torah, “the commandment”- this is the Mishnah,” which I have written”- these are the Prophets and the Writings, “that you may teach them”- this is the Gemara. And it teaches that they were all given to Moses on Sinai (TB Berachot 5a).

This passage is frequently cited as the proof text of Torah miSinai – that God gave to Moses everything that would become Rabbinic Judaism in later years. Either it was given at Sinai or it has no authenticity runs the argument. But surely this cannot be a literal reading of the biblical text, nor a complete reading of the Talmudic one.

It is found not at all in Bible, and indeed while the seeds of the idea of divine revelation encompassing the whole of what became Rabbinic/Halachic Judaism can be discerned, they are only in the later books of Chronicles and of Ezra and Nehemiah, books which are generally seen as being written only in the 5th/4th Century BCE. These books use the words haTorah / Torah while earlier books refer always to Torot, a plurality of teachings. The Book of Nehemiah even refers to Ezra reading “In the book, in the Law of God, (BaSefer, b’torat Elohim) distinctly; and they gave the sense, and caused them to understand the reading. (8:8,18), and also” Ezra the scribe [was asked] to bring the book of the Law of Moses, which the Eternal had commanded to Israel”, and so clearly by the early Second Temple period there was a tradition of a Mosaic/divine book of Torah, which is variously described as being the Torah of God or the Torah of Moses, something unknown in earlier biblical texts.

This idea is seized upon by the Rabbis who took for themselves the right to decide not only what the texts would mean, but also used it to assert their authority and control over the people. Hence we have the midrashic text in Leviticus Rabbah (5th Century) ““everything an experienced pupil might ever say to his teacher was revealed to Moses at Sinai.”, and the more worrying Mishnah Sanhedrin (10:1) “…These have no share in the World to Come: One who says that [the belief of] resurrection of the dead is not from the Torah, [one who says that] that the Torah is not from Heaven, and one who denigrates the Torah..”

Why did they do this? Was it in order to emphasise the authenticity of their authority post Temple, against the Karaites and the Sadducees and those who wished to continue Priestly authority? This would certainly make sense as they were reinventing what it meant to be Jewish after the central worship authority had disappeared, and a multiplicity of rival claims may have spread the Jewish people too thinly to survive.

But we are in a different world, where literary criticism and scholarship that takes into account the context of a text mean that we can see that Torah miSinai cannot be a literal description of our foundational texts. Even Maimonides, who famously enshrined Torah miSinai into his thirteen principles of faith, would surely have framed those principles differently in modern times, (And one must also take into account the context of those principles that became Yigdal – he was responding to Islamic claims about the superiority of its revelatory texts).

Whatever the Torah of Moses /the Torah of God means, for which the shorthand remains “Torah miSinai”, it has become a barrier for the Jewish people rather than an enabler. People who have good academic understanding in the secular world find the notion of one book literally given at one time on a desert mountain to be improbable, which means that the world of scriptural literalists tries to keep modernity away from ‘their’ Jews, with terrible consequences often. People who seek to understand the text differently are shunned or worse, treated as if they are no longer Jews. And then there is the halachic process, which from being a dynamic and responsive practice has become solidified and deeply unhelpful often, simply because there is nothing ‘miSinai’ that pushes for change.

I love the idea of God speaking with Moses in the presence of the entire people, and that being an inspirational and creative moment that energised the ongoing relationship of God and the Jews. But I hate the idea that the route to the relationship is held in the hands of people with little understanding of modernity or the modern Jewish people and State, who try to excommunicate anyone who challenges or brings in modern ideas from the Covenant and the peoplehood.

It is time to reclaim Torah MiSinai, to go back to that moment where the whole people heard and said, we will do and we will understand, and while they may have deputed Moses to negotiate the contract on their behalf, did not abdicate their own responsibility for being part of the development of what the contract would mean over time. 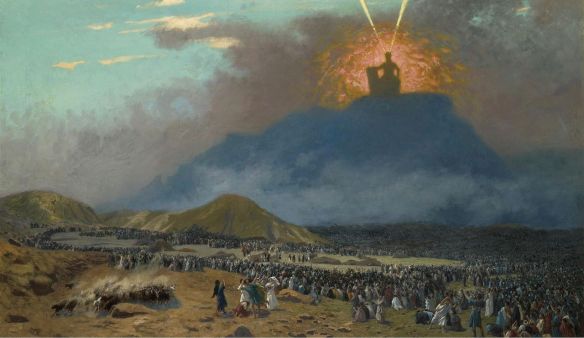